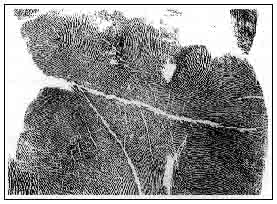 Figure A-4: example of a simian crease.

The simian crease is recognized as a horizontal crease which covers the complete width of the palm. Both in handanalysis and in science this crease is usually considered as a merging of the heart line and the head line1. The term simian crease' is named to the fact that the hands of monkey-like (simians) usually shows 3 or 4 horizontal creases, which appear to be related to the human simian crease.

In the beginning of the 20th century biologists and anthropologists got excited to study the dermatoglyphics and the palmar creases. And nowadays the dermatoglyphics are known as the most important aspect of the human body to study genetic and biological differences among different populations.

The following will show that next to Down's syndrome the simian crease is very frequently seen in other (genetic) disorders. And the section NEUROTICISM presents new research results linking the simian line to the human psychology of 'healthy' people. 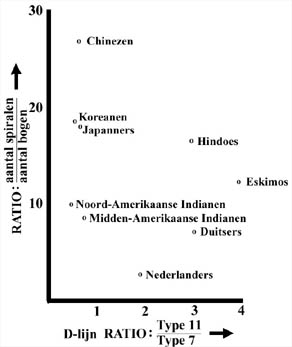 Figuur A-5: dermatoglyphic features in populations.3