The interest of the scientific community for handresearch has resulted in a large number of studies focussed on the onset of the skin patterns (dermatoglyphics) and the palmar creases.

Many of these studies indicate that the so-called 'volar pads' play an important part in the hand development - more specific: in the development of the dermatoglyphics and palmar creases: see figure A-6. The fetal 'volar pads' can be described as little pillows in the foetal hand, which rise only temporary on the surface of the skin before the permanent manifestation of the dermatoglyphics. 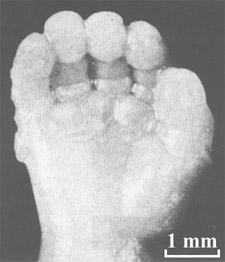 • More about the prenatal development of the hand & the palmar lines! 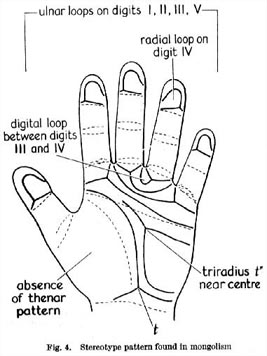 In the scientific vocabulary the patterns of the skin on the palms and soles are described with the verb 'dermatoglyphics' (dermatoglyphs). This terminology was introduced in the 20's by Harold Cummins.

However, this is not the only reason why Cummins is sometimes mentioned as 'the father of the dermatoglyphics'. For his dermatoglyphic observations in Down's syndrome3-4 can be considered as another milestone in the history of the medical sciences. But the importance of Cummins observations was not fully recognized before the discovery of the genetic cause of Down's syndrome - about 20 years after Cummins major discovery! Some of the palmar stereotypes of Down's syndrome are shown in the 'phantom-picture' which was published by Penrose in 1963 in the well-known scientific magazine 'Nature'.5